The first known Nativity scene in Bohemia was presented to the public by the Jesuits at their church of St. Climentus at Charles bridge in 1560. What it looked like nobody knows exactly. Presumably, it was an imitation of the manger in Bethlehem where Jesus was born. Following this example, Nativity scenes started to spread to other Czech churches and monasteries.

Nativity scenes created by Czech craftsmen are often very different from those produced in other countries. The striking difference is the fact that besides the figurative picture of Jesus’ birth, the holy family and angels, scenes that depict everyday life have also been included. It would not be a Czech nativity scene without musicians, shepherds and their sheep, craftsmen, traders, and farmers, all of whom are bringing gifts to the infant messiah. 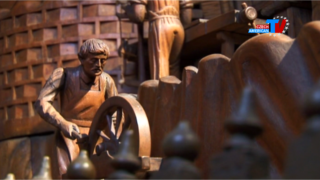 Today the religious character of Nativity scenes has faded into the background and to most people they are now more representative of the feeling of family good cheer, because Christmas is frequently the only period of family togetherness during the year. The present-day Christmas exhibitions of Nativity scenes demonstrate that the tradition of their construction is still alive and well in the Czech Republic.

Czech-American TV is a non-profit charitable organization under Section 501 (c)(3) that broadcasts for anyone who wants to learn more about Czech Regions and Heritage. Our main objective is similar to one of public broadcasting (PBS). Our unique video programs brings information about Czech regions, culture traditions and genealogy. Czech Language Education Programs and traditional recipes make a very important part of the Czech-American TV’s broadcasting as well. Czech-American TV also produces an e-Radio program with original Czech folk music that you can listen to any time to any time from your PC from anywhere in the world! There are several ways how you can support our broadcast. Please click here for more Information. Thank you!