Discover Czech Regions: Hradec Kralove Region – At the turn of the 18th and 19th centuries the Hradec Kralove region became the second most important center of the National Revival after Prague. Various societies and groups of patriotic intellectuals undertook numerous activities for public stimulated its overall cultural development in the subsequent years. 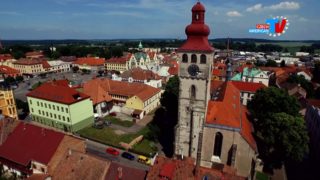 Town of Novy Bydzov – was established early in the 14th century with a regular ground plan. The remains of a moat are visible  today. The Gothic 14th century church of St Lawrence, the Marian Plague Column in the middle of the square, the Neo-Gothic Town Hall, the Neo-Renaissance District House, the Art-Nouveau Sporitelna Building and the museum are significant monuments.

Town of Jicin – is a picturesque, historical, modern and dynamic town and is  the gateway to Cesky Raj (Bohemian Paradise) a well-known nature reserve and is the second most important tourist area in Bohemia. The first records date back to 1293. After 1337 it was owned the Vartenberg,Trcka and Smiricky Families. 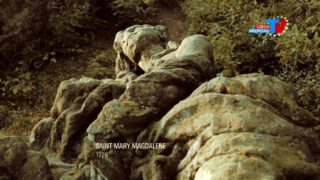 Nativity scene by Matthias Braun – It is a group of biblical sculptures and reliefs the central motif being the birth of Jesus was carved in rock by him in the forest between Dvur Kralove and Kuks. Count Sporck commissioned it to be a place of meditation and relaxation for Kuks spa visitors. 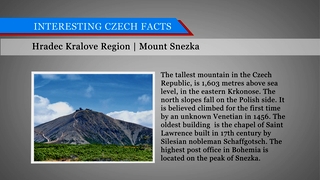 Czech Landmarks:  Snezka – The highest Czech mountain rises up from the long ridges of the Krkonose Mountains like a pointed three-sided needle. Set out to conquer the queen of Czech mountains and one of the symbols of the Czech Republic.

Czech Destinations: Hradecko – is not only an important tourist destination but also an ideal place for cultural enjoyment, sightseeing and active relaxation. In view of the favorable geographic conditions of the Elbe lowland it is possible to make use of pleasant cycle-ways, which connect most of the points of interest of this area.

Special Report: This time from City of Hradec Kralove